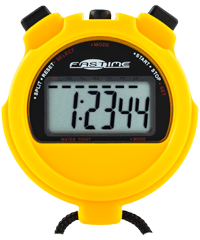 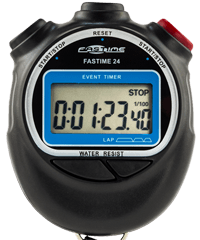 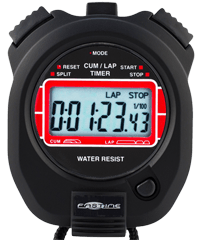 About our Range of Athletics Stopwatches

For a stopwatch to be suitable for serious athletics timing and coaching, it needs to be able to time in minutes,seconds and 1/100th second. A memory function would also be preferable so that you can recall your lap times and cumulative lap times either during or after the event by using the memory recall function. The running time shown on the stopwatch display should be the cumulative lap running time. Other useful stopwatch functions for coaching include various countdown timer options for training sessions.

If you need to download times from a series of events have a look at the Fastime 26 Data Download Stopwatch with this you can download upto 500 splut times to a Windows based PC for data analysis and/or printing out. Great value too. 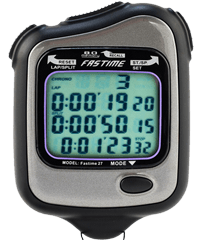 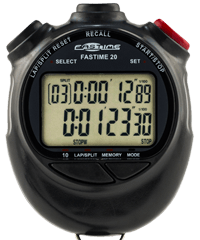 very pleased with great well described stop watch, it does all the functions i need as an athletics coach.
5
5/ 5stars
david thomas on 5th January 2010

Have two of these watches which I use for timing track sessions and races, they are perfectly adequate for everyday athletics/running training/racing. Using the lap mode enables you to time an effort and the rest interval using one watch, by pressing the lap button, not the stop button.
4.5
4.5/ 5stars
P J Stewart on 3rd February 2010

Wanted a good stopwatch to replace the one that I’d had for years. Plenty of choice and a range of prices to suit. Found one that was suitable for my needs at a great price from Fastime. All for about a fiver. Couldnt beat that anywhere! Great deal methinks!
4
4/ 5stars
DN on 10th February 2010

A very good stopwatch. Lots of functions, 500 lap/split memory. We use it for running tracks with a lot of athletes. Easy to recall the data of each athlete. Ordering and payment was easy to do. Delivery was prompt.
5
5/ 5stars
Jan on 7th April 2011

Great Stopwatch does everything you want and more. highly RECCOMEND
5
5/ 5stars
Wal on 10th October 2011

excellent product and fast service.i use stop watch for use in athletics
4
4/ 5stars
stephen carroll on 28th May 2012

excellent value and stops/starts with simple button sequence, unlike some "better" watches
5
5/ 5stars
Stephen Rowden on 9th April 2015
1 2 Next »
© 2021 - AST Limited.
Cookie Notice: This website does not store personal data in cookies. More info ...
I'm fine with this