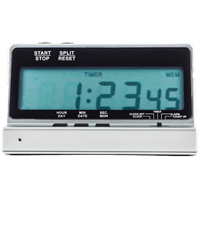 About our Range of Off Road Eventing Stopwatches

We recommend our exclusive RW3 Copilote digital wristwatch specially designed by us with the input from WRC co-drivers and now used by WRC teams and the top competitors.

This unique watch, which shows time of day and chronograph simultaneously, has been designed with a host of functions dedicated to rally use, while remaining very easy to use - even in the heat of competition.

If you just want to take split times between the cars on the stages then we recommend the Fastime 4 lap and cumulative split stopwatch.

The C5010 large display timer is used to countdown time in service.
If you are rallying in North America, you should also look at the Fastime 500DM decimal minute stopwatch. This stopwatch times to 1/100th of a minute.

EXCELLENT stopwatch, lovely large numbers on the face to see easily while on the move. Also has easy-to-understand instructions for use, with BIG buttons on the watch to press according to need.
5
5/ 5stars
Fuller on 21st April 2011

Wanted a stopwatch that sits on my wrist rather than around my neck. This is perfect and the large size allows buttons to be easily operated when wearing gloves.
5
5/ 5stars
B Wright on 13th September 2012

Very happy with stopwatch, has all features I needed. Easy to use. Arrived in New Zealand in 5 working days. You can buy with confidence from this company. Highly recommend.
5
5/ 5stars
John Rippon on 1st December 2012

I am training for a 50 mile Ultra Marathon Trail Race. As I do my interval training and tempo runs I could not read the numbers of my Soleus GPS watch. Even with a headlamp on or the early morning sunlight I still could not read it. The numbers are too small and the backlight is not helpful at all. With my Fastime 11 Watch those are no longer issues or problems for me! The numbers are very large, digital numbers. I can read them easily with a headlamp on or in the early morning sunlight. The backlight is also all I hoped it would be. I will start training for a half ironman in a year or so. I am looking forward to be wearing my watch on the long bikes rides so it can be easily read. Fastime has the products for any and every athlete at any level. If you are a referee at any level you will also find all of your sporting event needs met by their products as well. Love, love, love my Fastime 11 watch!
5
5/ 5stars
Mark Molina on 27th July 2014

A very nice stop watch, simple to use, intuitive, plus we can download the data into our computer.